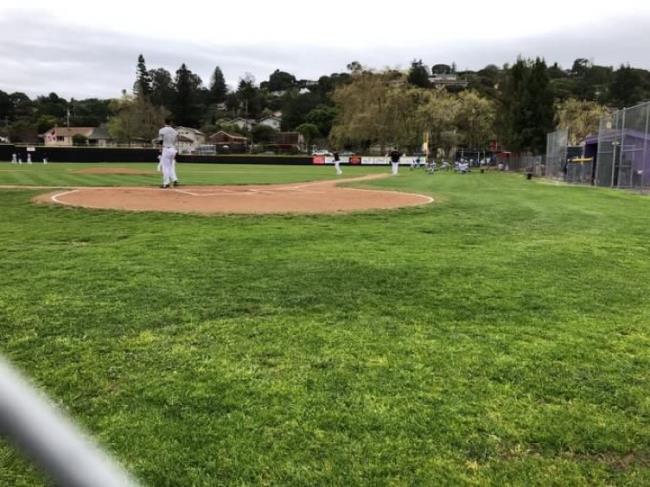 Jameson Patanapanich was hit by a pitch with one out in the top of the 10th inning for the Gauchos, and Issac Sloan walked to put a pair of runners on base. Henry Degnan then singled to left on a 1-2 count to score Patanapanich and give El Cerrito (19-6) the one-run lead.

Petaluma pitcher Danny Marzo retired the next two batters in order to avoid any more runs being scored, but the damage had been done. Petanapanich, who took the mound in relief of Gaucho starter Ricky Salas in the eighth inning, set the Trojans down in order to secure the upset victory for El Cerrito.

Nick Andrakin took the ball for Petaluma to start the game. He mowed through the Gauchos in the first two innings, getting them to fly out all over the outfield.

Salas, last year’s NCS Freshman of the Year, took the mound for El Cerrito. He got through a 1-2-3 first frame, but ran into trouble in the bottom of the second inning, when Trojans freshman phenom Garrett Lewis homered deep into the Petaluma (18-9) night in left center field to give the Trojans a 1-0 lead.

Meanwhile, Andrakin would get in and out of trouble, as in the top of the fourth inning, he got Issac Woldt to ground into a 4-6-3 double play.

Connor Robertson, however, started the top of the fifth for El Cerrito with a hard single to left, and Diangelo Fleetwood ripped a fastball just inside and down the left field line. Coach Kenny Haysinger held Robertson at third for Reed Sues to hit with no one out. He hit a sac fly to bring home Robertson and tie the game, and as the ball was thrown back in, first baseman Sam Brown tried to throw behind Fleetwood at third, and a low throw in the dirt got past third basemen Lewis for Petaluma, allowing Fleetwood to score to give El Cerrito the lead.

The teams traded zeros until the bottom of the bottom of the seventh. Salas was still out on the mound trying to close a complete game for El Cerrito. He got Kempton Brandis to line out, then pinch hitter Mark Wolbert walked, and Devin Gottschall singled to right to bring him to third. With one out, pinch hitter David Haulot popped out to Degnan for out number two. Marzo then came up, with Petaluma’s season on the line, and dropped a bloop single in front of Fleetwood to tie the game and delighted the crowd that had erupted.

Marzo then came into pitch for Petaluma to begin extra innings. He carved up the Gauchos for innings eight and nine.

Patanapanich came into throw for El Cerrito. He breezed through the eighth but ran into trouble in the ninth. Brandis reached on an error, and two batters later, a balk and a walk put runners on the corners. Marzo had another chance, this time to win it, and flew out to left.

El Cerrito moves on to face Casa Grande on Saturday, after Casa held off Concord, 3-2.

Around the NCS playoffs

Colin Brown struck out seven and allowed just three hits, in six innings, as Drake beat Arroyo, 1-0. Eamonn Lance hit a solo home run, his 11th of the season, to account for the Pirates’ only run of the game. Drake now faces Washington-Fremont in the quarterfinals, after the Huskies upset Northgate, 2-1, in extra innings.

Connor Charpiot allowed just four hits, and Maria Carrillo used an eight-run outburst in the bottom of the fifth inning to beat San Lorenzo, 11-1. Brian Orr went 3-for-4 with a double and drove in a pair of runs.

Carson Gerhardy allowed four hits and no earned runs, lifting Piedmont to a 6-2 win over Salesian. EJ Cheung doubled and drove in three runs to pace the Highlanders offensively.

Tamalpais pitcher Jack Loder went the distance for the Red-Tailed Hawks, allowing just two hits and striking out four, as Tamalpais beat Marin Catholic, 1-0, to earn a date against Alameda in the Division II quarterfinals. Sam Pletcher drove in Tam’s only run of the game.