THROWBACK: Petaluma holds on for victory in re-instated Egg Bowl 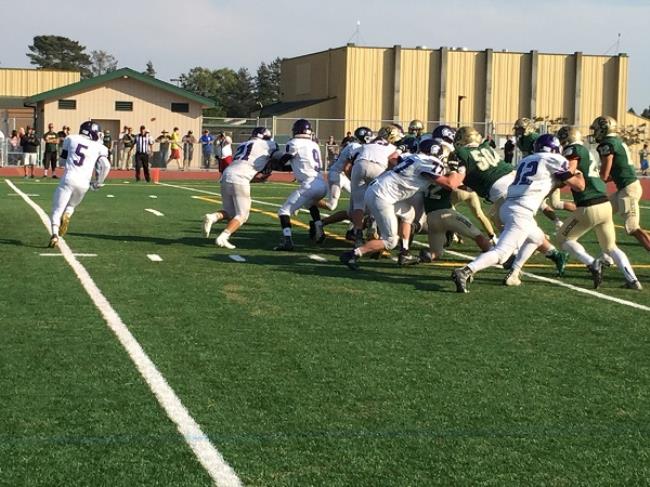 YSN365 is looking back at some great memories in local sports. Take a look back at the reinstatement of the Egg Bowl from September 16, 2017.

Story and image done by Harold Abend of Prep2Prep.com

Even after the pick by Rollstin, Casa Grande (0-3) still had life until a fourth down pass by Jance Offerman with 43.3 seconds to go fell incomplete allowing the Trojans to run out the clock.

“I put it all out there for my team,” said Rollstin, a 5-9, 177-pound senior captain Petaluma Coach Rick Krist calls the team leader and a “true football player.”

After being suspended following a contentious game in 2011 and concurrent with Casa Grande moving from the Sonoma County League to the North Bay League, the game was scrapped but re-instated with Saturday afternoon’s contest.

The series in a town once known as the chicken capital of the world actually dates back to 1974 with Petaluma now holding a 23-15 advantage. But since 2000 Casa Grande has an 8-5 edge and had won the last two meetings before the game’s suspension.

The 2011 game was the culmination of an east/west rivalry that got out of hand. Casa Grande from the east side of town won the game 35-9, but there were close to 20 penalties called with half of them personal fouls, vulgarity and racial epithets were exchanged, and a player was ejected.

The decision to re-instate the Egg Bowl was not without detractors, however in the end after a six-year hiatus a decision was made to move forward with a goal of building the community at its roots. Local veteran prep sports scribe Johnie “JJ” Jackson of the Petaluma Argus-Courier even dubbed the game the “Community Egg Bowl.”

There was one unsportsmanlike penalty, but after a few hard tackles players from opposite teams helped each other up. Even the cheerleaders got into the act. At halftime they performed together on the field for the first time ever and to the delight of standing room only crowds on both sides of the field.

Petaluma jumped out to a 14-0 first quarter lead on the first 1-yard TD by Rollstin and a 36-yard bootleg around right end by quarterback Justin Wolbert that caught Casa Grande flat-footed.

The ensuing series started with a sack of Offerman but the Gauchos junior shook it off to convert three crucial third downs in a 55-yard, 11-play drive that made it 14-7 after a 3-yard TD run by Kenneth Fitzgerald with 10:31 in the second quarter.

From there neither team could do much until Casa Grande came up with a huge break that knotted things at 14-14. On third-and-16 Offerman threw what looked like a sure interception but the ball bounced off the Petaluma defender’s hands and straight up in the air and into the arms of Isaiah Cappelen who took it 32-yards for the equalizer.

Petaluma, however, was not to be denied. Krist went to the ground and between Rollstin, Dominic Ayers, Wolbert and Justin Turner. They drove 66-yards in 12 plays that put the final points on the scoreboard with Rollstin’s plunge. During the drive Ayers had a 28-yard run on third-and-nine, and Wolbert faked everyone again with an 11-yard bootleg, this time around left end.

What made things even more interesting in a somewhat bizarre finish was Petaluma kicker Isaiah Blomgren, who hit the crossbar on an earlier PAT, got under the ball this time and a spinning pigskin fell just short of the bar, meaning a TD and PAT by the host Gauchos would mean a win.

Instead, Casa Grande fumbled on the fourth play of the ensuing drive, but they got it back since after Petaluma recovered the Trojans fumbled it away themselves after one play and the Gauchos got it on their own 35.

Casa Grande got a fourth down and three third down conversions by Offerman but after 11-plays he threw it into the hands of Rollstin at the Trojans 19 and it looked like the deal was sealed for Petaluma.

Instead Petaluma went three-and-out and after receiving a punt Casa Grande was back in business on their own 44 yard line. Offerman completed four straight passes to make it second-and-seven from the Petaluma 16 yard line. From there however, the Trojans defense stiffened and forced three incomplete passes to make Petaluma an Egg Bowl winner.

Rollstin made the big plays but Wolbert led Petaluma in rushing with 81 yards rushing and also passed for 45 yards.

For Casa Grande Fitzgerald had 82 yards rushing and the one score, and Offerman passed for 171 yards but he was only 14 for 27 with the interception.

“It was a big win because it was a hyped game,” Krist said. “We didn’t play perfect but we were close on those two big stops at the end.”

“It was a very important win for us because it gives us momentum going into our league opener with Analy,” Rollstin said.

Since the move of Casa Grande to the North Bay League Analy has won 30 straight Sonoma County League games and the last five championships. Now, with the start they’ve had Petaluma would appear to be a threat to Analy. We’ll find out if the Trojans can end the streak next Friday night in Sebastopol.