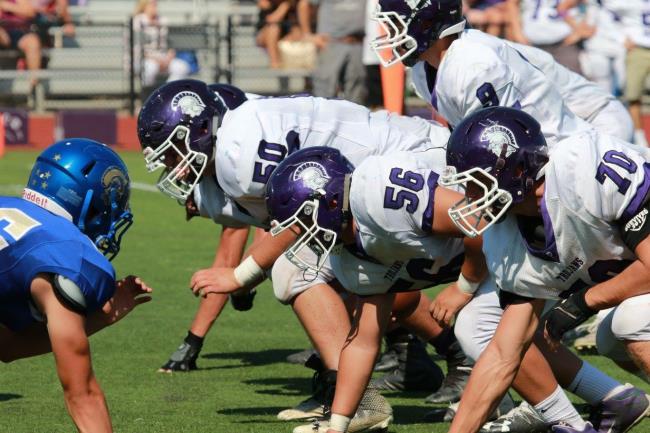 YSN365 is looking back at some great memories in local sports. Take a look at the weekend of September 7th, 2017.

MARIN COUNTY, CA- With both teams averaging at least 45 points in their first two games, the game between Petaluma and Terra Linda was set up to be an offensive showing. It lived up to the hype as Petaluma got a 52-44 win on the road in Marin County.

It was Terra Linda that got off to the early lead. A pair of fumbles by Petaluma and a 76 yard TD run by Dominic Martinez and a 54 yard pass gave Terra Linda a 14-0 lead five minutes into the game.

At the beginning of the 2nd quarter, a pair of short runs got Petaluma back in the game, but failed PAT attempts made it 14-12 in favor of the host Trojans. Kobe Johnson’s 80 yard run extended the lead to 20-12. On Petaluma’s ensuing drive, Terra Linda’s Jackson Zabierek stripped running back Jacob Rollstin and returned the fumble 51 yards for a touchdown to make it 28-12.

Rollstin then punched the ball into the end zone to end the half as Terra Linda led 28-20.

Terra Linda opened the second half with an eight-play, 74-yard drive that quarterback Matt Peters capped with a four-yard touchdown run.

Petaluma marched down the field for a long, and physical touchdown drive that led to Rollstin’s fourth of the game. Terra Linda led 36-28.

An interception by Rollstin led to Petaluma quarterback Justin Wolbert running for a 35 yard touchdown to tie the game at 36. Both teams then traded defensive stands, including an interception by Petaluma’s Isaiah Blomgren, but after a four and out by Terra Linda, they quickly got the ball back on a fumble and took it inside the Petaluma 10 yard line. Martinez scored on the next play and Terra Linda pushed the tie into a 44-36 lead.

Wolbert would then carry for a 48 yard keeper for a touchdown and a two point PAT to tie the game at 44 with nine minutes to go.

Terra Linda got the ball back, and on a 3rd and four, Petaluma’s Michael Baribault deflected a screen pass to Dominic Ayers for an interception, Peters’ third of the game. Rollstin converted two fourth downs for Petaluma and then punched it in from five yards out for the game winning score.

El Molino fell behind 17-0 at the half and never recovered as they fell to Orestimba. Their only score was a touchdown in the third quarter.

Sonoma Valley’s first game of the season didn’t start so well. They put themselves in a hole on the second play from scrimmage. A bad snap set up El Camino’s first score, and a long methodical drive put them up 14-0 at the half. El Camino’s defense held steady in the fourth quarter as Sonoma Valley tried to get back into it.