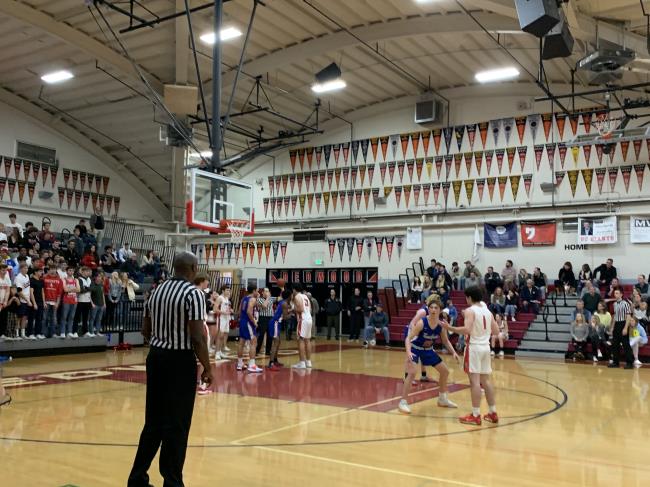 LARKSPUR, Calif – Tamalpais’ gritty defense down the stretch loomed large as the Hawks beat rival Redwood on the road, 44-41, to move to 3-0 in Marin County Athletic League play.

Dylan Reed’s two free throws with 20.2 seconds remaining made it a 44-41 Tamalpais lead. An open three from Redwood’s Tommy Quanstrom hit back iron, and the Hawks were able to run out the clock.

“This is a good team win. Up and down the bench everyone contributed to this one,” Morgan said.

A defensive battle early on was brewing. The game was tied a six for most of the first quarter after an early blitz by both squads, but with about two minutes to go, another blitz of points came. Xavier Williams hit back to back shots for Tamalpais, then TD Elliot-Diab hit a long two for Redwood. Freshman Ben Jenkins responded with a three for the Hawks, then Quanstrom hit his first three, and then Reed closed out the quarter with a bucket. After all of that Tamalpais held a 16-11 first quarter lead.

Tamalpais lost their rim protector Sean McCarthy in the first quarter due to an ankle injury, and sat the rest of the game, per Morgan. Tamalpais’ Tyler Reed also played with a hurt ankle.

Tamalpais would slowly build up its lead in the second quarter even more. Redwood started off the quarter strong with three buckets, but Reed would score the Hawks’ next nine points, trading baskets, finally nailing down two free throws at the end of the half, preceded by Connor Jenkins doing the same to build a 33-23 halftime lead.

New Redwood head coach Jay Demaestri was not going to make it easy on the Hawks to close this out. After Tamalpais built their lead to a game high 37-23. Redwood would slowly but surely come back into the game. The Giants were able to get to the charity stripe, and another three from Quanstrom made it an 8-0 run and a 37-31 deficit. After Tamalpais’ David Spector missed two free throws, Redwood’s Pasquale Ancona made just a four point game with a bucket near the end of the quarter.

“Mental toughness was big tonight. It wasn’t a pretty game, but we had to find a way to win ugly,” commented Morgan.

Redwood would have plenty of chances to tie the game or take the lead in the final quarter, but the Giants missed six straight free throws, and allowed Tamalpais to build a 41-35 lead with 4:32 to go. Dominic Wyllie would try and will the Giants back into the game, with five straight points to pull it to within one. With 31.3 remaining, now down by two, he hit the front end of a 1 and 1, but missed the second one. Redwood shot 1-8 from the free throw line in the fourth quarter.

Tamalpais improves to 7-3 overall and 3-0 in MCAL play. The Hawks will begin the Chris Huber classic at Acalanes next Thursday, opening with De Anza.

“This was a big confidence builder. For guys who usually don’t play extended minutes in the fourth quarter, and played well tonight is huge for their confidence individually, and huge for us as a team,” Morgan said.

Redwood drops to 3-4 overall and 1-2 in MCAL play. The Giants start the Bambauer classic at Marin Catholic next Thursday, opening with defending VVAL champion Napa.