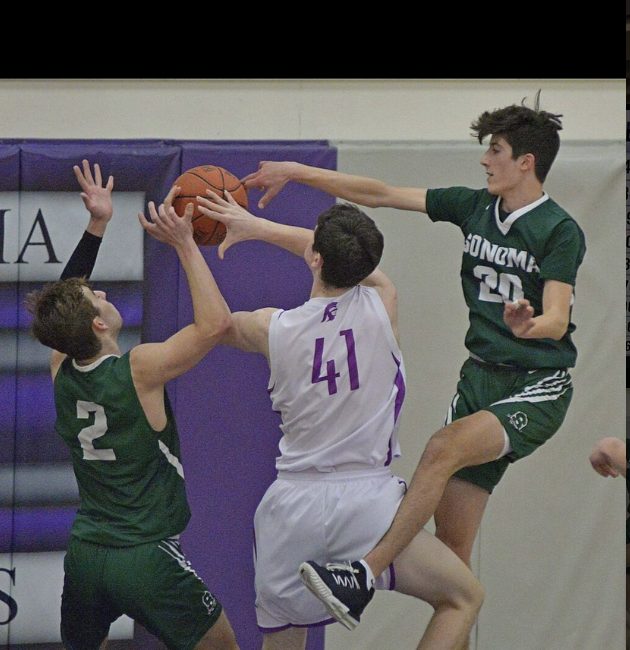 Sonoma and Napa County’s boys basketball underclassmen provide some of the better talent in the North Bay moving forward. Let’s take a look at some of the best of the best that represent the classes of 2022 and 2023.

Andrew Pengel had a stellar sophomore season at Rancho Cotate. He averaged just over 17 points a game, and shot 43% from the field. He was the number one scoring option for the Cougars, as he scored more than 10 points in almost every game, with the exception of four of those games. Rancho is filled with young talent as they steadily rebuild into a contender, and he’s a big part of that. Pengel’s biggest scoring nights came against Ukiah on January 7th, and Maria Carrillo on February 5th when he scored 29 points in each of those games. He also had two 25 point games, two 24 point games, two 23 point games, and two 22 point games. In total, he had 12 games with 20 points or more. He goes into his junior season with 453 career points. Rancho looks to be one of the favorites in the newly aligned North Bay League-Redwood, which says goodbye to Healdsburg and Maria Carrillo, and says hello to Windsor. Pengel was a first team all NBL-Redwood, second team all YSN, and a Cal Hi Sports All State Nominee.

Oda just finished up his second season with the Napa varsity squad and put up some respectable numbers. He scored around 10 points a game, four assists, and just under two steals. Last year, Oda was a key contributor in their VVAL championship season. Although the team took a step back this season due to losing seniors and losing Brock Bowers due to an injury, he still finished up a solid season. His best all around game occured in his team’s first meeting against Sonoma Valley, when he scored 20 points and had seven assists. He also had solid games against Westmoor and California, scoring 16 points each, and had a 15 point outing against Santa Rosa in December. In the California game, he also dropped in six assists. Napa looks to regroup from a subpar season under new head coach Alejandro Thomas in the 2020-2021 campaign. Oda was named Honorable Mention in the Vine Valley Athletic League, the same title he received last season as a freshman.

Sophomore Dom Girish completed a very solid season, earning a plethora of awards along the way. He averaged 19.2 PPG along while shooting 42% from the field and 41% from three point land. He posted five games with big scoring numbers. He scored 25 points each in games against Encinal on December 7th in the Hornet Classic, and against Napa on January 29th. He scored 26 points against El Camino on December 6th again in the Hornet Classic, and 29 points vs Terra Linda on November 23rd. His season high came on February 7th, when he scored 33 points against Justin Siena. Girish has 721 career points overall, making it very likely he will reach the 1,000 mark as a junior this coming season. His Sonoma Valley Dragons finished 16-11 overall, with an 8-4 league mark, good for second place in the Vine Valley Athletic League. Watch for the Dragons to be a title contender in the VVAL this coming season. Girish was first team all league in the VVAL, an all YSN 1st team player, and was a Cal Hi Sports All State nominee.

Mathison, after completing his first year with the Sonoma Valley Dragon varsity squad, ended as the second leading scorer at 12.3 points per game, behind fellow sophomore Dom Girish. As the season went along, it started to become clear that he was going to be their second scoring option. The lefty shooter shot 47% from the field and 37% from the three point line this season. His best game came in the Dixon Ram Jam against Pierce-Arbuckle scoring 25 points, grabbing three rebounds and dishing out two assists. He followed that up with a 21 point performance against Petaluma the following game. He ended the season on a high note, with a 24 point, two rebound and three assist night in a four point road win over Casa Grande. Mathison was second team all VVAL and will hope to lead the Dragons to their first league title since 2005. That year, they tied with Windsor as Co-Champs, but beat the Jags in the SCL Tournament Championship 56-52 in a game played at Sonoma State University’s Wolves Den.

Cole Garzoli isn’t one of the more talked about young players in the area, and could possibly thrive in that aspect. Petaluma had very high expectations, as he was an integral part in Petaluma’s 17-10 season, as he was one of the many players the Trojans were waiting for to make an impact on the varsity level. However, the team nearly epically collapsed. After starting league 6-0, they lost five of their final seven games. Their two wins came against Casa Grande on a game winning three with 20 seconds left, and a buzzer beater from 30+ feet out for a one point win over Napa. Nevertheless, Garzoli’s versatility as a forward or a guard makes him tough to stop. He put up good outings against West Petaluma rival St Vincent de Paul scoring nine points, another against Capuchino in their own Trojan Classic dropping in 12 points, and perhaps his best all around game may have been the team’s first meeting against Sonoma Valley. He scored 13 points, but had an impact in all facets of the game, leading Petaluma to a one point come from behind victory in that one. With losing just two seniors, the Trojans are poised to also be a title contender in the VVAL. The Trojans have not won a regular season league championship since 1992, but won a league tournament championship back in 2016, when they defeated Analy 27-26 at Santa Rosa Junior College’s Haehl Pavilion.

The sophomore from Montgomery led the Vikings to a second half turnaround. Montgomery was sitting at 10-11 overall following their second loss to Piner on January 24th. They then won 5 in a row, and 6 of their last 8 overall, including two wins over arch rival Cardinal Newman on the road. One of those wins would come in the NCS Playoffs. Bessire is consistent night in and night out, sporting one of his best games in the Brett Callan Memorial Tournament, a 19 point outing against Washington-San Francisco in route to an All Tourney selection. Even with the struggles Montgomery may have gone through early in the season, Bessire looks to be a major factor for next year’s squad which will be a contender in the loaded NBL-Oak, looking for their first league title since 2014 under new head coach Steve Arrow. Bessire was a first team all NBL-Oak selection, 1st team all YSN selection, and a Cal Hi Sports All State nominee.

Macdonald was one of the few young players that led the Healdsburg Greyhounds to a 25-4 overall record, and a perfect 14-0 regular and postseason NBL-Redwood mark. Healdsburg coach Yasha Mokaram spoke highly of his leadership.

“He’s a vocal leader. He is by far the most communicator on the court. Off the court he’s more quiet, and reserved, but still a leader” Mokaram said. “He’s a very good rebounder and moves feet well defensively and is good at keeping guys in front of him.”

Some of his best games include a 21 point, 15 rebound outing in their first battle against Elsie Allen. Mokaram also spoke about their first game vs Maria Carrillo in which they won 53-50.

“There were 4 possessions that he dove on the floor that gained us an extra possession that was the difference between winning and losing. I didn’t think about his impact at the time but after watching the film, it makes you realize how big it really was.” Mokaram said.

MacDonald was named honorable mention in the NBL-Redwood.

One of the two freshmen on the list, is a little bit of a sleeper of the group. He was a part of a young Justin Siena team last season that boasted only two seniors on the court, and made the NCS Playoffs. He had a couple standout games. In their second league game vs Vintage, he scored seven points while also posting 11 rebounds. In their 9th league game against Napa, he pulled in 11 points. The Braves struggled throughout league play, but were able to pull off a big upset over Petaluma on the road on the final night of the regular season. They will look to keep climbing the ranks in the VVAL, which boasts much bigger schools than Justin Siena’s 550 students or so. Jackson was named honorable mention in the Vine Valley Athletic League.

The lone freshman on the Greyhounds squad last season didn’t show signs of being one, as his head coach pointed out.

“In the beginning of the year he didn’t look like a freshman. We were playing tough opponents like Tamalpais, who we played twice and had constant full court pressure, but he handled it” said Mokaram. “He struggled later in the year where the grind of the high school basketball season started to wear on guys but overall, he started and finished the year in an impressive fashion.”

One of the games that Coach Mokaram mentioned he thought Vogensen was exceptional was the NBL-Redwood Title game against Maria Carrillo, played at Rancho Cotate’s arena-like gymnasium.

“He hit a huge three at the end of the first half to put us up 4. He also had an incredible blocked shot. He was still diving on the floor for loose balls late in that game when we were way ahead. He plays hard all the time.” Mokaram commented.

Mokaram spoke highly of Vogenson as someone who can do many things naturally that are hard to coach, mentioning he has good court vision and is a very good passer, especially in the open court.

One of two sophomores on the Trojan team last season had some big moments for his team. A few that come to mind are a near half court shot against Santa Rosa in the Rose City Tournament, and a big run stopping three in their second matchup against Casa Grande. One of Giacomini’s best games came in a 15 point outing against St. Vincent de Paul. He had a solid 12 point outing in the aforementioned game against Santa Rosa, and an 11 point outing against Elsie Allen in the Trojan Classic. Giacomini is a sharp shooting guard that Petaluma will be relying on heavily next season. His range could literally be baseline to baseline at points. His ability to get hot at any moment could be a game changer in any game he plays. With the departure of another shooter, Ryan Sullivan, it looks like Giacomini could take the reins of getting those shots that Sullivan was taking last year. With the help of Giacomini, Petaluma should be fast and furious again next season, competing for the league crown.

The incoming junior dropped in 6.3 points per game in 23 games. He shot 61% from the field, and 43% from three point land.  A solid player for head coach Madson Lott, he will be one of their key leaders over the next few years, as the Panthers battle in the very tough North Bay League-Oak, who just gained Healdsburg and Maria Carrillo, while dropping Windsor. Perhaps one of Logue’s best statistics was his steals, in which he grabbed 30 for best on the team behind Tyler Edwards, who had 31. He also added 24 deflections, again good for second on the team.