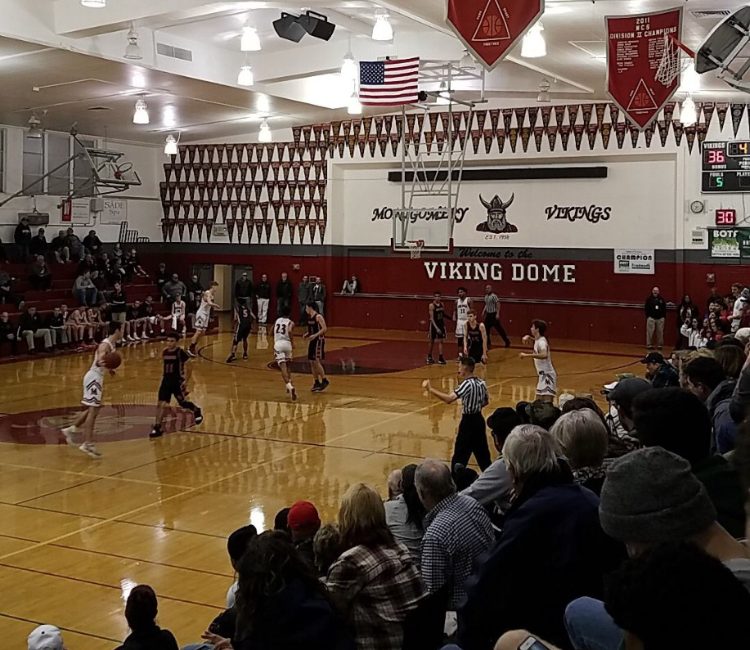 The Viking Dome played host for a NBL Oak Division matchup between the Montgomery Vikings (12-5) and Santa Rosa Panthers (15-5). The Vikings entered the night tied atop the Oak Division with Cardinal Newman and Santa Rosa sitting just one game behind tied for second with Piner.

After multiple turnovers and missed shots on both ends, the first quarter ended with Montgomery leading 9-8 thanks in large part to 5 points from Brandon Lucas (Jr.). The second quarter saw more turnovers and Santa Rosa make a run with threes from Jalen Prince (Sr.), Emilio Campos (Sr.) and Andre Gaudreau (Sr.). However, the Panthers left some points at the free throw line, going 0-4 in the quarter and Montgomery took a 21-19 lead into the half.

The start of the second half was a weird one. The quarter opened with 4 quick points from Montgomery’s Devon Ramirez (Jr.) but the Panthers’ Prince responded with 5 points of his own. Santa Rosa then turned the ball over twice due to shot clock violations and but were disciplined enough defensively to not commit a single foul for the entire quarter. The game would be tied at 27 entering the fourth.

The Vikings’ Harvey Rouleau (Sr.) would open the final quarter with a three and Santa Rosa’s free throw woes (5-10 in the quarter) would catch up with them. The Vikings would get contributions from Emosi Tuinabewa (Sr.) and Jack Svoma (So.) but the Panthers wouldn’t go down easy, with Allen Baker (Sr.) and Gaudreau doing their best to keep them in the game.

Things started to get tense with 4 minutes left: Montgomery was leading 36-35 when Tuinabewa would sink both free throws and Lucas would chip in another two extending the Vikings’ lead to 5. The Panthers’ Grant Goodwin (Sr.) would hit a three to bring them back within 2, but a lay in from Montgomery’s Eli Camarillo (Sr.) made it 42-38 with 2:10 left in the game. Santa Rosa’s Isidro Garcia (Sr.) would get fouled with 57.7 seconds left and go 1-2 at the free throw line—it was now 42-39 Vikings. Montgomery’s Rouleau would hit a jumper with 40 seconds left and another lay in from Camarillo would seal the deal. Montgomery would hold on to defeat Santa Rosa 46-40.