Vintage runs all over Petaluma in a rout 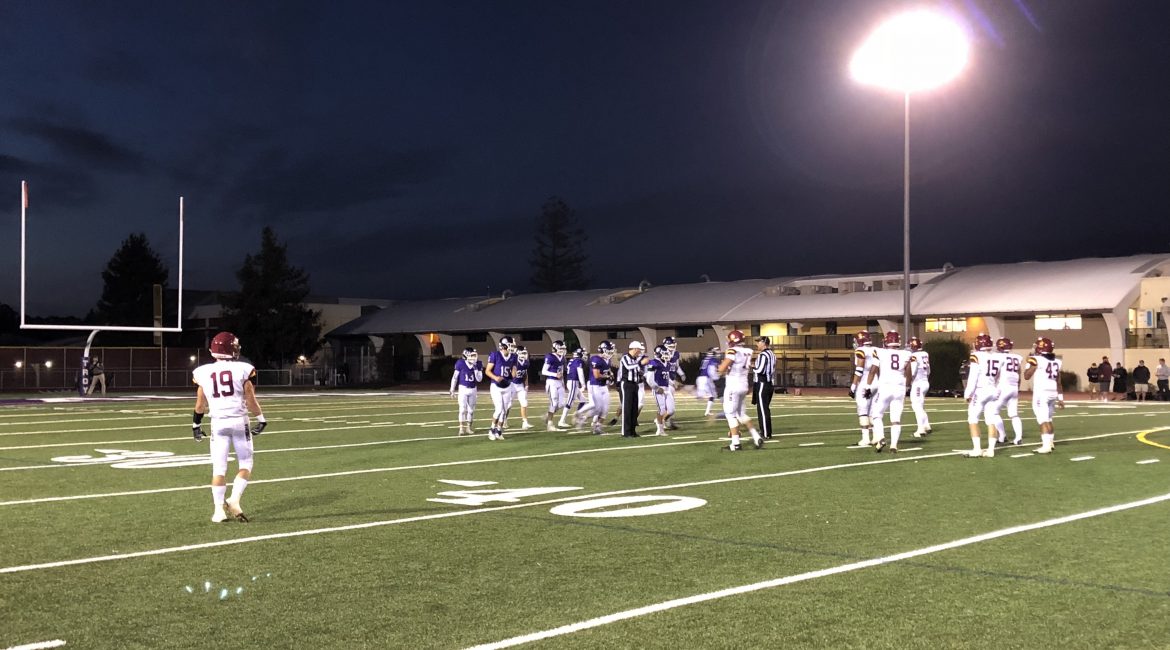 PETALUMA, CA – Vintage dominated from the first snap as they cruised to a win over host Petaluma Friday night, 50-7 in Vine Valley Athletic League play.

Michael Webber’s 62 yard touchdown run with 2:10 to go in the first quarter all but sealed the deal as Vintage lead 26-0, and then rolled the finish line.

Vintage (4-2, 2-0 VVAL) got the scoring kicked off by a Viliami Schaumkel 32 yard touchdown run. He then followed that up with a 3 yard touchdown as they were off and rolling, leading 13-0.

Facing a 4th & goal from the 13 yard line, a little trickery ensued. A direct snap to Schaumkel, followed a pitch in a reverse to QB Ghisletta, followed by a pass to Webber for a touchdown, made t 19-0 Vintage.

“We couldn’t stop them. They had size and speed. They were a very good team.” Said Petaluma head coach Rick Krist.

For good measure, they would add on. Drew Hatfield broke off a 44 yard run, and then on 3rd down, he would run it into the endzone for a touchdown. It made the score 33-0 Vintage into the half.

“Our offensive line has been gelling as of late. They’ve been making the correct calls at the line of scrimmage.” said Vintage Head Coach Dylan Leach.

The injury bug that has hit Petaluma this year would continue. Right Guard, and Middle Linebacker Daniel DeCarli came out with a hip injury in the first quarter. They would play all of the second half without their Outside Linebacker and Defensive anchor Nick Ayers due to concussion protocol. Later in the game, they would lose sophomore backup QB and Safety Jack Hartman to a knee injury.

Ghisletta kept himself for a 10 yard touchdown scramble to add on, and then kicker Eddy Gonzalez hit a 33 yard field goal to make it 43-0.

Petaluma had a few bright spots during the game. Another Sophomore, Jack Santos made some nice plays on defense, as did Logan Wagers in his first game of the season.

Pedja Zivkovic’s 45 yard touchdown made it 50-0, with some of the backups starting to file into the game for both squads.

“Our team is really trusting our scheme and playing for each other.” mentioned Leach.

Petaluma (4-3, 1-2 VVAL) wouldn’t be shutout Friday Night. After a nice, long drive, Cole Powers from five yards out dropped a perfect pass to Daxton Hogya for a touchdown. Hogya would then kick himself to make it 50-7.

Vintage hosts American Canyon next week in what could very well be the VVAL Championship game.

Petaluma has a bye next week before continuing a long rivalry with Sonoma Valley at Arnold Field on October 5th.