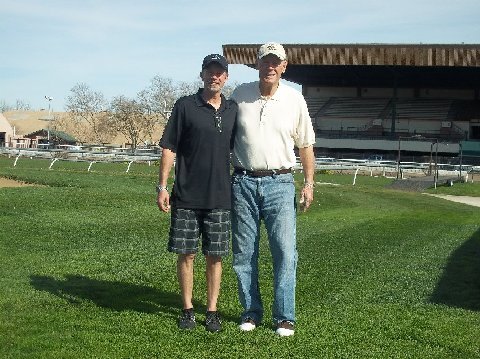 There are golf stories that can make you laugh, make you cry, evoke all sorts of feelings and responses.
Recently I was fortunate enough to meet Robert Walls and his father, Neal, and I came away thinking that in a world so often punctuated with anger, hatred, fear and distrust, there are still some really uplifting stories that simply make you smile and feel good and maybe a little more hopeful.
Robert Walls doesn’t consider what he does most Fridays as anything special, and that is certainly his deserved opinion. But in fact, Robert, a 51-year-old retired UPS employee, makes those days very special for his 80-year-old father, who suffers from mid-stage dementia, when the two men play nine holes of golf at Fairgrounds Golf Course.


“He’s my dad and this is what I have to do, what I want to do,” says Robert, whose mother Anna had seven children when she married Neal, and Robert was only 1. “Mom needs a break so Neal and I walk on Wednesdays and play golf or pool on Fridays.”
Neal , who owned C & W Ford in Sebastopol, can still play the game, although Robert helps him with club selection and where to hit the ball. And when they’re done, they share a beer and some conversation on the patio.
“He doesn’t always recognize other family members, including my mom, but he always seems to relate to me,” says Robert. “He’s played a lot over the years and started me in golf when I was 10.”
Neal’s condition may have begun as much as 20 years ago although nobody really acknowledged it or talked about it until fairly recently., but Robert says “he’s always enjoyed playing . . . he just gets a little frustrated now.”
“I like doing this because it’s important to Neal, to me and my mom.” explains Robert. “Dad still has feelings and a conscience and deserves this ,” adding “something like this helps give people dignity, the feeling they can still accomplish things . . . I wish more people in similar situations would consider something like this because it affects a lot of families.

Robert, who has a son, Bryce, and two step-sons and lives five minutes from his parents’ house, says people tell him how great it is for him to do this but he just feels it’s something he wants to do for Neal. “He’s my dad and he really seems to enjoy it . . . that makes it all worth it for me.”
Telling you about Robert and his dad is the type of story I always loved to write in my weekly golf column in the Santa Rosa Press Democrat. Those stories didn’t focus so much on golf courses or golfers, but more on people.
As I often wrote, and still believe, the column was at its best when I could write about golfers like this, real people in our community. And I hope this story about the Walls is just the first of many I am able to share with you in GOLF 707.
If you know of someone, or a situation you think other golfers would enjoy hearing about, please email me at bmeadows4sports@aol.com and let me know.
The goal of my old column was primarily to get names and activities of local people in print, people who might normally never have that opportunity. I also enjoyed tracking down the source of complaints you might have about particular golf courses.That column was popular and successful not because I wrote it, but because of the contributions from those who read and enjoyed it.
So don’t be a stranger. If you have a golf story to tell, an activity to promote, even some shameless self-promotion, let me know and I will take it from there. I want GOLF 707 to be what my old column was — a way for local golfers to share ideas and thoughts, to ask questions, to offer praise when deserved and criticism when it seems appropriate.

An ace at Northwood
Vern Ayers, a fixture at Northwood GC for many years, writes to let me know Randy Hallas recorded a hole in one at his course on March 16.
Randy aced the 122-yard No. 8 hole, and the feat was witnessed by John McCarty, Charlie Wheeler, Dave Camarillo and Tom Flynn.
What’s the strangest hole in one you’ve ever seen, or heard about? As years go by, sometimes that crazy richochet off a rock that somehow found its way into the hole becomes a perfect shot that bit, and rolled back into the cup. Sometimes that 105-yard ace on a simple hole becomes a 160-yard shot over a creek. Time has a way of helping us embellish our efforts.
I’ve come close to an ace many times, but only made one, less than six months after I started playing, on a 190-yard uphill hole — honest ! – in Cupertino, and my playing partners insist the ball actually sailed left far out over a parking lot — I had a wicked slice in those days — then dove back toward the green.
I didn’t even talk to the green, figuring the ball ended up way to the right of the flag, but when I couldn’t find it, one of my partners looked in the hole and found my ball. We figured it had to have slammed the flagstick at warp speed and somehow found the cup.
I was too new to the game to really appreciate it, but one of my partners, an older man who had never seen an ace in 50 years of playing, was so shook up he couldn’t finish the round.
When I checked in at the clubhouse, the pro took down information and submitted it to Golf Digest and I got a little certificate a while later. For some reason, instead of writing Bruce Meadows, I wrote Ace Meadows, and proof of how misguided mailing lists can be, I received mail for at least 10 years addressed to Ace Meadows.
So if you have a good hole in one story, let me know.

Kids need to exercise some patience
The future of golf — the future of so many things — depends on getting youngsters involved.
Jess Stimack, a pro at Bennett Valley, had some thoughts on the subject of kids and golf.
“In the kids’ eyes today, golf is not attractive,” says Jess. “It requires patience, actual time spent working at getting better, when most of the kids today are worried about how many ‘likes’ they get for posting a picture on social media“
Jess adds, “every kid is looking for a shortcut, and doesn’t want to put in the actual work, and time required to get better. It has to be immediate, they can’t wait to just get a tiny bit better everyday. “ He urges golfers of all ages to “stay patient.“ Good advice for all of us.

A chance to play a gem
Aetna Springs, in Pope Valley and about an hour away from Santa Rosa, is having a special outing Sunday, April 26.
The nine-hole course is unique, one of the oldest west of the Mississippi, and if you’ve never played it, you should try it at least once.
So on Sunday, you can play 18 holes for just $26, including a cart. Tee times, which will be on a first-come, first-served basis, will be assigned so send your tee time preference to rick@golfguide.org or you can register online. Call Aetna Springs at 965-2115 for additional details.

A win for Rodney
Former Santa Rosa-area golf pro Rodney Wilson, playing out of Eagle Ridge GC in Gilroy, teamed up with Mitch Lowe to capture the Northern California Section of the PGA 2015 Club Team Championship.
Wilson and Lowe combined for a 9-under-par 135 in the two-day tournament at Bayonet and Black Horse courses in Seaside.
Windsor pros Jason Schmuhl and Patrick Steiner finished tied for sixth with a 5-under-par 139.

Did you know?
The longest drive ever recorded was 515 yards? And the longest putt was reportedly 375 feet.
The longest golf course in the world is the par-77 International Golf Club in Massachusetts, measuring 8,325 yards. And the highest course is the Tactu GC in Morococha, Peru, 14,335 feet above sea level. And I thought the course I played in Leadville, Colo., at 10,000 feet was up there!
The longest golf hole in the world is the par-7 No. 7 hole on the Sano Course at Satsuki Golf Club in Japan.
And if you’re battling to get your handicap down, keep in mind that according to recent statistics, 80 percent of all golfers will never achieve a handicap of less than 18!

Keep in touch
Thanks for your contributions and your support of GOLF 707 on www.ysn365.com
I am always appreciate any golf-related items or questions you send my way to bmeadows4sports@aol.com so keep them coming.
Also, in order to keep GOLF 707 afloat, we would love to add some sponsors so let us know if you are interested, or know somebody who might be.
Share