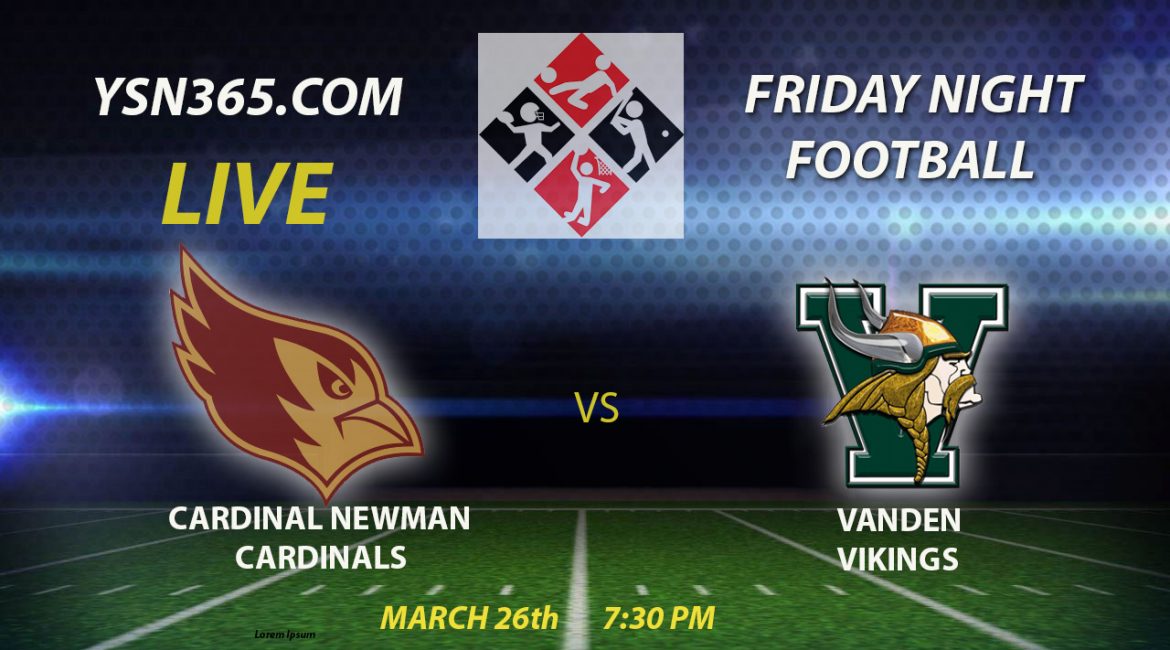 This week almost every team that is playing high school football this spring will have at least one game in. After a win over Windsor last Friday, the No. 1 Cardinal Newman Cardinals (1-0), who are the top-ranked team in the YSN365 Computer Rankings, second in NorCal and 29th in the state, will be taking on the Vanden Vikings (1-0). Tsion Nunnally will look to continue to dominate as he ended their game last week with four touchdowns on six catches and 246 yards. This game will be live streamed here, on ysn365.com.

Around the Vine Valley Athletic League, the No. 2 Vintage Crushers (2-0) will go head to head against the No. 4 American Canyon Wolves (2-0). Vintage will be led by junior running back Dylan Smith who is averaging 162 all purpose yards per game and six touchdowns on the season. The Wolves are looking to win their third straight game to open the season.

After losing 49-13 last week to the No. 3 Rancho Cotate Cougars, the Casa Grande Gauchos (0-2) look to get their first win of the season against the winless Sonoma Valley Dragons (0-2). The Gauchos will be looking to bring a different approach than they did in their first league game of the season as they have now added transfer junior Quarterback Jacob Porteous who threw for 147 yards last week.

The No. 8 Napa Grizzlies (0-1) will host undefeated No. 7 Justin-Siena Braves (2-0) in hopes of getting their first win of the season. Last week, the Grizzlies struggled to move the ball against American Canyon only putting up three points. On the other side, the Braves have been lights out on defense only allowing 14 points combined in their first two games.

The Petaluma Trojans (0-2) canceled their non-league game this week against Rancho Cotate (2-0). They’ll take on Napa next week.

No. 6 Windsor (0-1) will head south to take on the Marin Catholic Wildcats (1-0). Windsor was tied with Newman in the second half but failed to score after their opening drive. For Marin Catholic, they jumped out to a 28-0 halftime lead and never looked back as they shut out San Marin 35-0.

St. Vincent de Paul (1-0) will travel to Sebastopol to take on Analy following their upset victory at Ukiah last week. It will be the Tigers’ first game of the season. The Mustangs came out firing last week on the ground behind Sophomore Running Back Kai Hall who rushed for 100+ yards for the ninth straight game last week and will look to do the same this week going for their eighth straight regular season victory dating back to 2019.

Two winless teams, the Healdsburg Greyhounds (0-1) and the San Rafael Bulldogs (0-1) will face off this week. Healdsburg had some struggles offensively in their first game as their only two points came from a safety, but will look to bounce back this week against the Bulldogs.

El Molino (1-0) plans to take on the Ukiah Wildcats (0-1).El Molino looks to get a repeat performance from Weston Lewis who was 10-14, 144 yards passing and two touchdowns last week at Healdsburg.