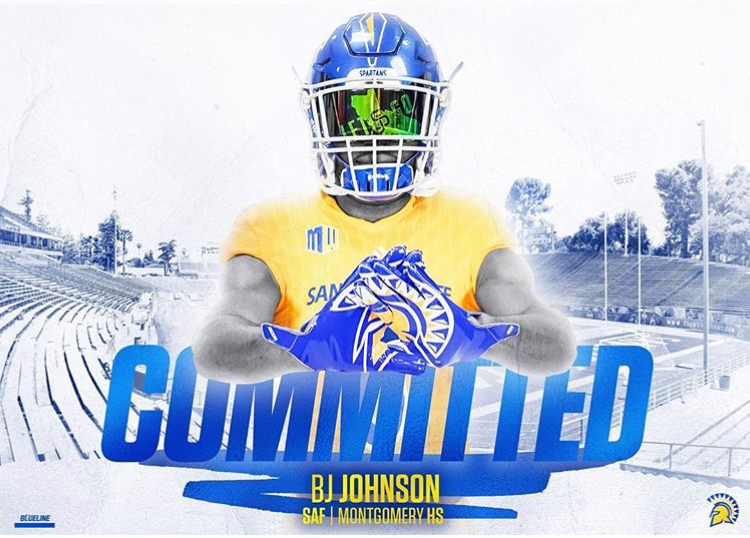 William Johnson Jr., better known as BJ, was a young and restless kid growing up in Akron, Ohio. At the age of 5, his mother signed him up for football and it was love at first sight.

He would hold onto that love of football throughout the many moves that came because of his family’s military background. When he was 8, his family relocated to Colorado Springs, and moved again when he was 13, this time settling in Santa Rosa. In 8th grade, Johnson attended Cook Middle School where he would stand out on the basketball court and wrestling mats. He became the City League Champion in wrestling and admits that it helped with his tackling on the field as it reinforced the idea of keeping your head up, wrapping up opponents and driving into the ground.

After a referral from his uncle, Johnson attended Montgomery High School and made football the priority. But he didn’t come to realize his potential as a Division 1 prospect until his junior year when he learned how to get in touch with coaches and maintain relationships with them. He credits his high school coaches for this, “Most of the coaching staff at Montgomery played some level of college football, which helped me get the exposure I needed as well as drilling the importance of punctuality and responsibility”.

Relationships grew and schools began to take note. He received letters of interest from Cal, UCLA and Oregon State, in addition to offers from Wyoming, Howard, Sac State, The Air Force Academy, Nevada-Reno, UC Davis and San Jose State. Johnson recalls pondering the Air Force academy. “It was hard to shy away from Air Force. I knew I’d be set for life as far as academics were concerned and I’d become an officer upon graduation,” he says. “But I would have to serve and my dream was to go D1 and then to the NFL.”

Johnson’s official visits were to Nevada-Reno, UC Davis and San Jose State. “They were my final three and I loved all of them. The thing was I wanted to experience a college town and all of them offered it.” UNR sent the first offer and heavy communication ensued before it eventually died out, but he still remembers that feeling vividly. “After getting that first offer, it felt like it had all worked out, I just felt blessed.”

While he played both wide receiver and safety in high school, he was recruited primarily as a safety. The 6’3” 190-pound two-way star finished his senior year at wide out with 33 catches for 572 yards and six touchdowns in addition to the 83 tackles and three interceptions he logged at safety. Johnson put on a show in a double overtime victory against Maria Carrillo in early September where he finished with six catches for 137 yards and two touchdowns. He found out later that San Jose State coaches and scouts were in attendance and happily surprised with the overall athleticism he demonstrated.

The decision to choose San Jose State came after his visit. Johnson was raised Christian, which instilled the importance of community and family, something he sensed on his visit. “I felt the family connection there. They felt like brothers. It wasn’t just offensive linemen here and defensive linemen here, they all bonded together. They were honest too, most of the players I talked to told me what they liked and disliked, they gave me a sincere idea of what to expect.” Family and the support system around him—consisting of his parents, three siblings, aunts, uncles, cousins and former Montgomery Vikings like Koa Misi (’04) and Marcus Ezeff (’04)—have him ready to take on the next stage of his life.

While he has a general idea of what to expect in this next stage, Johnson is very excited and ready to take on new college challenges. His 3.1 GPA will be tested as he wants to major in health sciences and minor in zoology. If the NFL dream isn’t realized, he plans on becoming a nurse or a doctor. And if it turns out the football and medical fields won’t take him, he likes the idea of working on wildlife education and preservation. “I love animals. My only traumatic experience was getting chased by a dog as a kid but I still love them to death.”

What scares and excites him about life at San Jose State is living on his own, making sure he wakes up on time and stays punctual. He’s confident about learning a new playbook because he’s done it many times before. “There may be stuff I don’t get at first, but after writing and reps it will work out.”

Johnson is unsure if he will redshirt his freshman year because of a new NCAA rule that allows players to appear in a maximum of four games and still retain redshirt status. “Right now, my goal is to start on special teams, if the coaches decide to play me more on defense I’ll be ready and we’ll see how it goes,” he says. With the help of his coaches he feels he can handle being a D1 athlete and all that comes with it. “They set you up to be successful. The only way you fail is if you don’t do your job.” Part of his job as a student-athlete will include hitting the books as well as the weights. In addition to the NCAA’s minimum 2.3 GPA prerequisite, San Jose State requires eight hours of mandatory study hall from Monday to Thursday if players want to suit up on Saturday.

When he’s on the field, Johnson models his game after shut down corner Jalen Ramsey and the ball hawking Charles Woodson, although he is relatively quiet unless an opposing player starts talking at him, then he may chirp back. He is confident in his ability to cover the field, whether in man or zone coverage, “It’s easier the more you communicate.” He could see a future at linebacker if needed, but would want to put on some more weight first.

He’ll miss the pregame rituals at Montgomery and being in the locker room before games getting guys hyped up for battle. In addition to his teammates, he will miss the coaching staff as well. “Playing for Coach Patton and his staff was awesome. They listened to us as

players, they encouraged us to come with them with our problems.” He might just miss those 5 a.m. workouts too, despite getting up being the toughest part. “No one wants to get up that early, but once you get started you just want to keep going.”

BJ knows that with all the attention and accolades, there’s still room for improvement. “My biggest strength is my overall athleticism, but I need to work on my overall speed and being more explosive as a runner.” This may be the reasoning for his decision to participate in track this upcoming spring semester.

As Johnson prepares himself for the future at San Jose State, he leaves an impressive past. Montgomery Head Coach Vertis Patton had nothing but nice things to say about him, “As a player, BJ was someone we could count on to make a big play when needed. A player who always competed at a high level. His greatest strength is his selflessness and football IQ. As a person, BJ is a respectful young man. He takes constructive criticism very well, good or bad. I look forward to watching his growth over the next few years. San Jose has got a great young man with great character and a talented athlete. It was truly a pleasure getting to know him this year.”