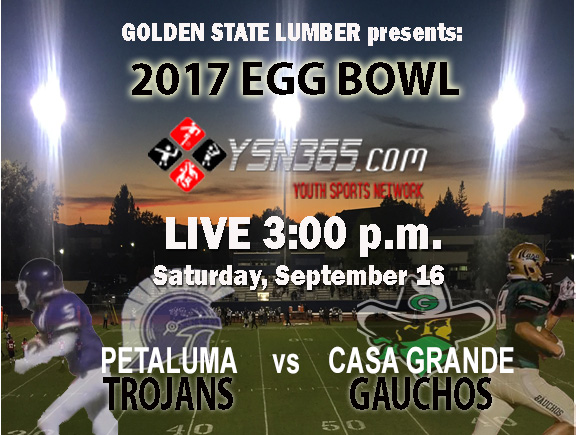 The last time the Egg Bowl was played, few people remember who won. Even further, I’m sure people don’t remember what the score was. They do remember that there were late hits, unnecessary penalties, and fans having trouble keeping the games in perspective that caused the stoppage of the game. We posted the video of the 2011 Egg Bowl on our Facebook page for you to take a look. You won’t see the cheap shots, and fights but you will see at the time that Casa Grande was the bigger, faster school, another reason for stoppage of play. 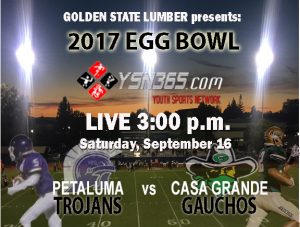 Things should’ve changed by now. Casa Grande has a new coach in Dennis Brunk. Brunk had a lot of success in his second and final season at Santa Rosa. The Panthers went 6-6 on the year and won an NCS playoff game for the first time in several years. Petaluma, on the other hand, still has Rick Krist at the helm. Now a veteran head coach, the Trojans have had a lot of success in the past few years. Three straight 7-3 seasons has quickly brought Petaluma back into the picture. 3-0 on the season so far, they could be set for big things.
That’s not what this game is about though. This game is about bringing the community together for a day of fun. The Petaluma Educational Foundation has partnered with both schools to be the non-profit partner for the Community Egg Bowl. The stress has been about helping the community. The teams have participated in many community service activities, including setting up and taking down the Petaluma Rivertown Revival festival. The players worked together to help the whole community, not just the west or the east side of town.
In short, this game sure will mean a lot to the players. They can have bragging rights over their friends on the other sideline. For the entire Petaluma community, it’s about a good time and watching our sons, grandsons, nephews, and friends all play in what should be a fun football game. This game should be put in perspective. This is for the players and the memories they can make from this experience. Let’s all have a good time Saturday afternoon at Casa Grande.
Don’t forget we will be streaming the game LIVE @ YSN365.com, kickoff at 3:00pm.