RANKINGS: TIME FOR SOME CHANGES 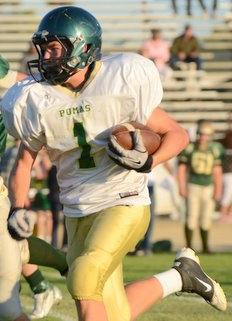 It is time to think re-alignment.
Maybe it is past time.
Wait it is past time.
Football has been in the middle of many controversies and I’m not talking about the off the field mess that is the NFL.
I am talking about how safe the game is and how some think football should be abolished.
I am not for that, not even close, but for football to make sense, it has to make sense.  Some games just don’t make sense.
It wouldn’t be so bad if these games that are played that don’t make sense happened every so often, that would be fine.  It is going to happen.   Heck it happens in the NFL (as Niner fans saw last Sunday Night).  But when it is an every week thing and that every week thing turns into two or three years it is time to do something about it.
This week in the SCL, Cal Preps is projecting two of the three games in the SCL to have a difference of 35 points or more.  If you looked at the SCL games it isn’t hard to figure which two games they are and it has been this way for the last three years, when the last re-alignment happened.  In one case it has been happening much longer.
One case is Analy, who since re-alignment is 15-0 in SCL play.  Now a dynasty happens, but enough is enough.   The closest of the fifteen games was the second league game in 2012, which was a 41-26 win over Piner.  The average SCL score in 2012 was 55-12, last year it was 51-6 and so far this year it is 57-14 and that is only half the story.  Most of the scoring in these games is done by halftime.   If Analy wanted to, the scores could get really ugly.  Last week they beat Healdsburg 67-8.  It is the fourth time in the 15-0 record they have hit the sixty point mark.   In all four of those games they were in the 50’s by halftime.  They could have scored 60 points in many, if not all the SCL games they have played in the last three seasons.
Two of the other games they hit the 60 mark was against Elsie Allen, a team they haven’t played yet this year.  The story with Elsie Allen is well known and this is a good time to repeat something that I have said before.   These kids must really like football and they are keeping the football program going at that school, but it can’t be fun going through all the hard work it taakes to play football, when you know what is going to happen on game day.   It is the adult’s job to help the kids out.
There are some easy fixes.  All the adults have to do is fix it.  I am pointing out the SCL, but there are teams in the NBL and the Marin County Leagues that are also in the wrong league.   There should be a committee in each area that meets every two years to check out the situation and make the needed changes.
There is no reason, or no good reason, that this has to continue past this season.
I have talked about this before and nothing has happened.
I don’t expect anything to happen this time either.
THIS WEEK’S RANKINGS
No. 1 Analy (Last Week No. 1) (6-1)…Pretty much explained Analy’s week in my rant. These big wins are not helping the Tiger’s post season cause in more ways than one.  It’s not helping in the rankings and it doesn’t help the development of a team.
No. 2 Windsor (2) (7-0)…This team needs some respect. A NBL team that is undefeated this late in the season is usually in some rankings.  They aren’t in the top ten in the Nor Cal Division 2 power rankings or the SF Chronicle Top 20.  The respect could start coming this week when they host Rancho Cotate.
No. 3 Cardinal Newman (4) (4-3)…Responded nicely to the tough loss to Rancho Cotate.  They end the regular season with Windsor, so they are still thinking NBL title.
No. 4 St. Helena (5) (7-0)…One of two area teams still undefeated.  They are ranked No. 6 in the Nor Cal Division 4.  That is the highest ranked local team in any of the state rankings.  That is in the future though.  Huge NCL I game at Fort Bragg this week.
No.5 Rancho Cotate (3) (4-3)…A classic trap game and they got trapped.   Big loss that will not only have league championship implications, but also NCS seeding took a hit.  They can make up for the league problem this week at Windsor.
No. 6 Maria Carrillo (9) (4-3)…After a couple of near misses they pull off their most impressive win in years.  Speaking of trap games, they go to Casa Grande this week.   After that is a trip to Windsor.
No. 7 Montgomery (6) (3-4)…Made up for slow start against Ukiah with a win going away.   The win over Maria Carrillo looks better now.   Last scheduled road game this week at Santa Rosa.
No. 8 Middletown (7) (5-2)…Much like Cardinal Newman,   no hangover after losing a big game with league championship implications.  They host Cloverdale this week, who at the moment is the only team left on schedule over .500.
No. 9 Fort Bragg (8) (5-2)…Looked ready for showdown game with St. Helena with big win over Willits.   The two losses are by a combined 19 points.
No. 10 Petaluma (10) (6-2)…Took impressive win over a decent El Molino team.    Still has Analy on the schedule, but NCS playoff spot looking good.
HONORABLE MENTION…Cloverdale, El Molino, St. Vincent
PLAYER OF THE WEEK
Alex Netherda, Maria Carrillo…In one of the biggest results of the season he rushed for 221 yards and three touchdowns to lead Maria Carrillo to the 34-28 win over Rancho Cotate.   All three of his touchdowns came when the Pumas were trailing.    Two of them were long runs of 35 and 50 yards.
My email address is jacpasquini@comcast.net