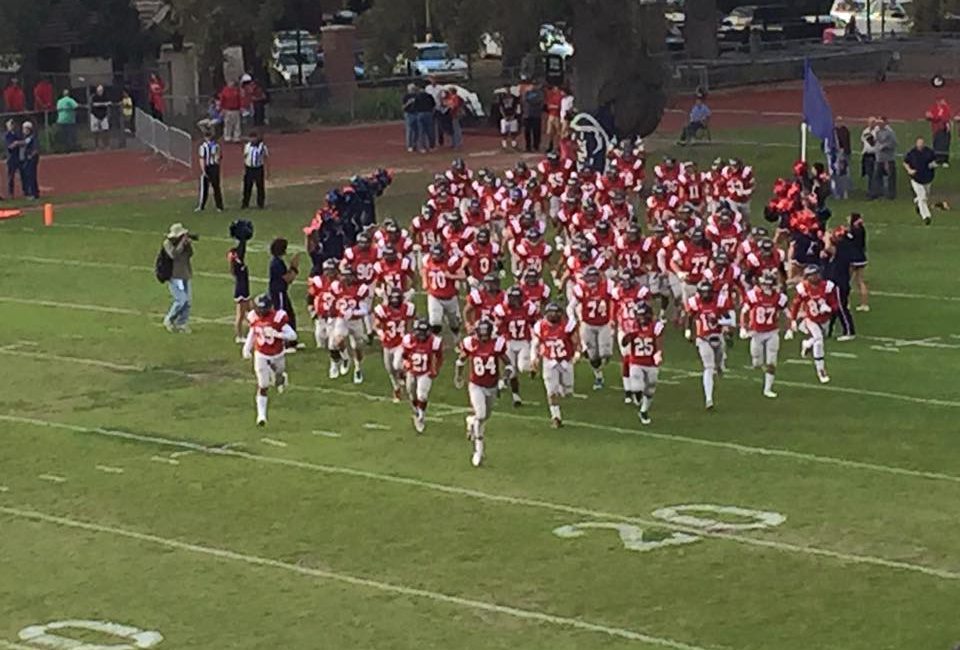 
The game seemed like it was slipping away. SRJC had just missed an opportunity after recovering a punt at the San Francisco 29 yard line. On the next play though, Vincent Jefferies threw the first of three interceptions. San Francisco then got two first downs and moved into SRJC territory, looking like they were going for the kill. Taylor Biaggi then intercepted a pass and returned it 61 yards for a score
It was Biaggi’s first interception of the season and gave SRJC some momentum. After a three and out SRJC went on its best offensive drive of the game. It was fueled mainly on the legs of Jefferies, who was the team’s leading rusher, which will tell you how the offense went for SRJC. The SRJC QB rushed for 86 yards on 16 carries. His legs got them into field goal range and when Andros Pedroza connected from 25 yards out, it was tied it at the half.
The momentum continued in the early part of the third quarter. After holding San Francisco on the opening drive, SRJC went on a long drive. This was a drive fueled by penalties. San Francisco committed four penalties for 55 yards, which set up SRJC at the San Francisco 16. Then was the turning point of the game. Jefferies threw a pass that was intercepted in the end zone by Deante Fortenberry.
Fortenberry made a mistake by returning it out of the end zone and was tackled at the seven yard line. It just made things a little harder as San Francisco went on a ten play 93 yard drive that took over five minutes and ended on Gordon’s second touchdown pass which gave the Rams the lead for good.
The situation became desperate shape for the Bear Cubs after the next possession. A five yard punt gave San Francisco the ball nearly in the red zone and they took advantage of that with a field goal and a 26-16 lead going into fourth quarter.
SRJC had one more good chance. After a pass interception by Natu Hezchias stopped a San Francisco drive. Jefferies hit Kerr Johnson on a 43 yard pass to the San Francisco four. SRJC couldn’t push it in and then disaster happened. A bad snap on the field goal led to a fumble. San Francisco picked it up and ran it for a touchdown, which was called back by (surprise) a San Francisco penalty. The penalty happened after the change of possession so San Francisco had the ball and then went on 71 yard drive that took over four minutes and that put the game away.
SRJC has showed that they have come a long way, playing a close game with San Francisco. The loss drops them to 4-3 and their conference record to 1-1. The Bear Cubs have the next two games on the road before coming home to end the regular season on November 14th.
WEEKEND SCOREBOARD
NORTH BAY LEAGUE
No. 1 Cardinal Newman 46 Ukiah 0
No. 7 Rancho Cotate 42 No. 5 Windsor 14
No. 6 Maria Carrillo 27 Casa Grande 21
Montgomery 28 Santa Rosa 21 (2 OT)
SONOMA COUNTY LEAGUE
No. 2 Analy 48 El Molino 6
No. 6 Petaluma 59 Elsie Allen 9
Sonoma Valley 14 Healdsburg 7
NCL I
Clear Lake (2-6) at No. 3 St. Helena (8-0) (GAME FORFEIT TO ST. HELENA)
No. 4 Fort Bragg 81 Willits 0
No. 9 Cloverdale 42 Lower Lake 6
Middletown 7 Kelseyville 0
BAY FOOTBALL LEAGUE
Harker (San Jose) 55 St. Vincent 8
NCL III (NO CAL PREPS PROJECTION)
Mendocino (1-6) vs. Calistoga (6-1) —(GAME FORFEIT TO CALISTOGA)
Tomales 40 Potter Valley 20
Upper Lake 46 Point Arena 44
Rincon Valley Christian 75 Laytonville 24
Anderson Valley (6-1) BYE
JUNIOR COLLEGE FOOTBALL
No. 3 San Francisco 26 No. 9 SRJC 16
My email is jacpasquini@comcast.net
Share