THE SRJC MEN DO IT 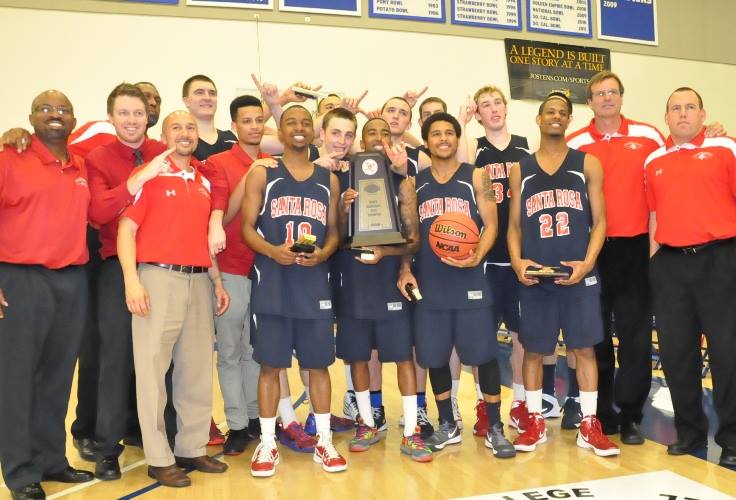 Alec Kobre, who played his high school ball at Montgomery, was named Most Valuable Player of the Final Four tournament as SRJC won the school’s first ever Men’s Basketball State Championship.

He should give a piece of the trophy to teammate Kai Drewry.

About twenty four hours after Drewry scored the winning basket with :04 left in the semi-final, he did the same thing in the Championship game  breaking the last tie of the game as SRJC took a 73-67 win over San Bernardino and that state championship.

Drewry, who went to Redwood High School in Larkspur and averaged 6.7 a game on the season, scored a season high 16 points in the championship game.   The last two came after San Bernardino had scored eight straight after it appeared the SRJC was home free with a 67-59 with two minutes left.

After Drewry hit his shot, SRJC held on defense and Luke Cocheran who average under two free throws a game on the season and shot 52.6 percent, drained two of them with :11 to let the celebration, that was close to starting two minutes earlier, begin.  He had also hit two that gave SRJC the eight point lead.

For the third game in a row SRJC fell behind early.   Six minutes into the game they were behind 14-6.    Unlike the last two games, they didn’t have the big run to take control of the game; they stayed close and didn’t take the lead until Matthew Hayes, the team’s leading scorer on the season, scored his first points on a three, for the first score of the second half, to make it 34-32.    It was SRJC’s first lead since 3-2.

SRJC withstood two rallies after that.   The second one in the last two minutes and the first after they took a 42-36 lead with 16 minutes left.  San Bernardino then scored eight straight points to regain the lead.   After an exchange of baskets, Davone Oliver hit a three to give SRJC a 47-46 lead and San Bernardino wouldn’t lead again.

The stars seemed to be aligned right for SRJC to do this.   That first State Championship seemed like a fantasy after a 3-6 start.   The Bear Cubs then won twenty two of their last twenty four games and the Championship Game win was Craig McMillan’s 300th of his coaching career at the school.

CONGRATULATIONS TO THE SRJC MEN