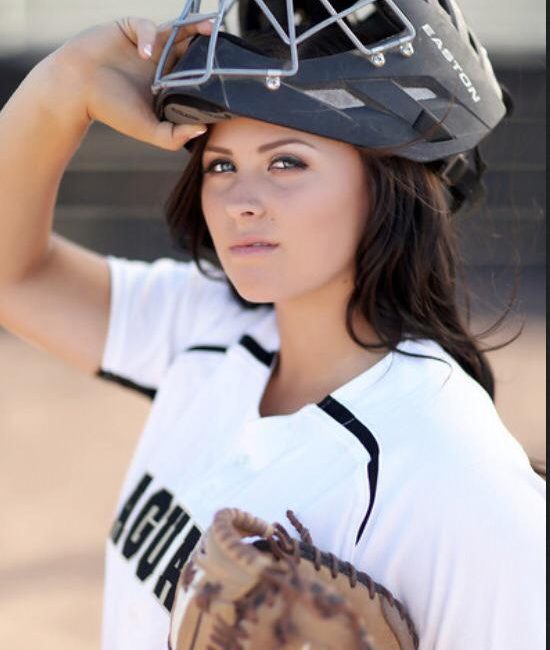 About a week after Angelica Terrel injured her ankle I was chatting with her on Facebook, checking in and seeing how she was doing.   That is how I do most of my conversations (through Facebook).   When I go to an event I don’t talk that much to the coaches or players.  I just let them do their thing.

Anyway, back to the chat with Angelica.   She said that she was hoping to be somewhat okay for senior night, maybe just to DH.   With the reports on how bad the injury was, that seemed like a fantasy.   We were talking a little over three weeks from injury to senior day and although it wasn’t broken, it was a severe sprain.   In part of the conversation she said that she was in a walking boot.

Well senior day was last Thursday, coincidentally against Ukiah, the same team she hurt her ankle against, and guess who was in the lineup?    She was the softball equivalent of the designated hitter, batting fifth in the order.  In her first at bat, with a runner at second and no outs in the second, she hit a line drive RBI single to right field.   She would later reach base on an error, be intentionally walked and fly out.

On the season, she is hitting .605 and nearly half of her twenty six hits are for extra bases, including three homers.   Whatever season she has left will be as an extra hitter.   Windsor finishes the regular season at Rancho Cotate and it appears they need a win to be eligible for the North Coast Section playoffs.

Angelica is a senior, on defense is a catcher and will be headed to San Francisco State next season, who is in the same league as Sonoma State.  She won’t be catching in the remain games because the ankle is tender and she can’t get in the squat.

She can still hit though.

NBL SOFTBALL NOT ONLY RACE OVER

The NCL world is finishing its league races and while Clear Lake has wrapped up the NCL I baseball race, the other three have a showdown to decide the titles.

NCL II Baseball:   St. Vincent has a one game lead over Rincon Valley Christian.   The two teams meet on Tuesday.

NCL I Softball:   Cloverdale and Clear Lake are in a virtual tie for first and meet on Tuesday.  That is the last league game for Cloverdale.  Clear Lake has a make-up game at Lower Lake on Saturday.

NCL II Softball:   St. Vincent has dominated but still has work to do.   They are at second place Calistoga on Tuesday.   Calistoga’s only league loss is to St. Vincent.

If you asking how much St. Vincent has dominated the answer is they have outscored opponents in NCL II play 173-0.

That isn’t a misprint.

Included is a 10-0 win over Calistoga in that first meeting.

St. Vincent, who is the two time defending NCS Division 5 champions, won a big non-league game against St. Joseph-St. Notre Dame 5-4.   The Mustangs scored two in the bottom of the seventh to steal the win.   That will help come seeding time for the NCS playoffs.  St. Joseph-Notre Dame is No. 3 in the Division 5 power rankings.

THIS WAS A PITCHING DUEL

There was another softball game on April 29th between two top five teams in the Division 4 when Fortuna traveled to Cloverdale.  If this game just decided who would host a potential playoff game, it would be big because of the difference in travel time.

The game went 11 innings and was won by Fortuna 2-1.   It was quite a pitching duel and might be the first of many between freshman Hailey Dolcini of Fortuna and Sophomore Teanne Edens of Cloverdale.

What caught my attention was in the 11 innings, Dolcini struck out 25 of Cloverdale’s 33 outs.  It reminded me of the strikeout streak Sonoma State Samantha Lipperd went on a few seasons ago.   Dolcini also pitched a no-hitter.  Each team scored a run in the tenth and Fortuna scored the winning run in the 11th.   The game was played under international rules so in the extra inning each team started with a runner at second.

Dolcini struck out the side in six of the 11 innings.    In three of those innings she did it in nine pitches.   In another she was forced to throw 13 pitches.   All 13 were strikes, but one batter fouled off 2 straight 0-2 pitches, before striking out.

Fortuna is 15-5 on the season and according to Max Preps, which granted isn’t the most accurate, but is all we have, Dolcini has given up eight earned runs in 110 innings.   She is averaging 11 strikeouts every seven innings (average length of game).

Edens isn’t the strikeout pitcher.   In this game she gave up three hits and struck out eight.   The most batters she faced in the first nine innings was four.  On the season her ERA is 1.50.   Over half the runs she has given up were in that weekend tournament in East Bay in Mid-April.

Rancho Cotate is having its annual alumni game next Saturday May 17th.   There is a full day of events with the game starting 11 pm.    There will be a Barbeque after the game.   To reserve a spot for the game email ranchobaseball@live.com